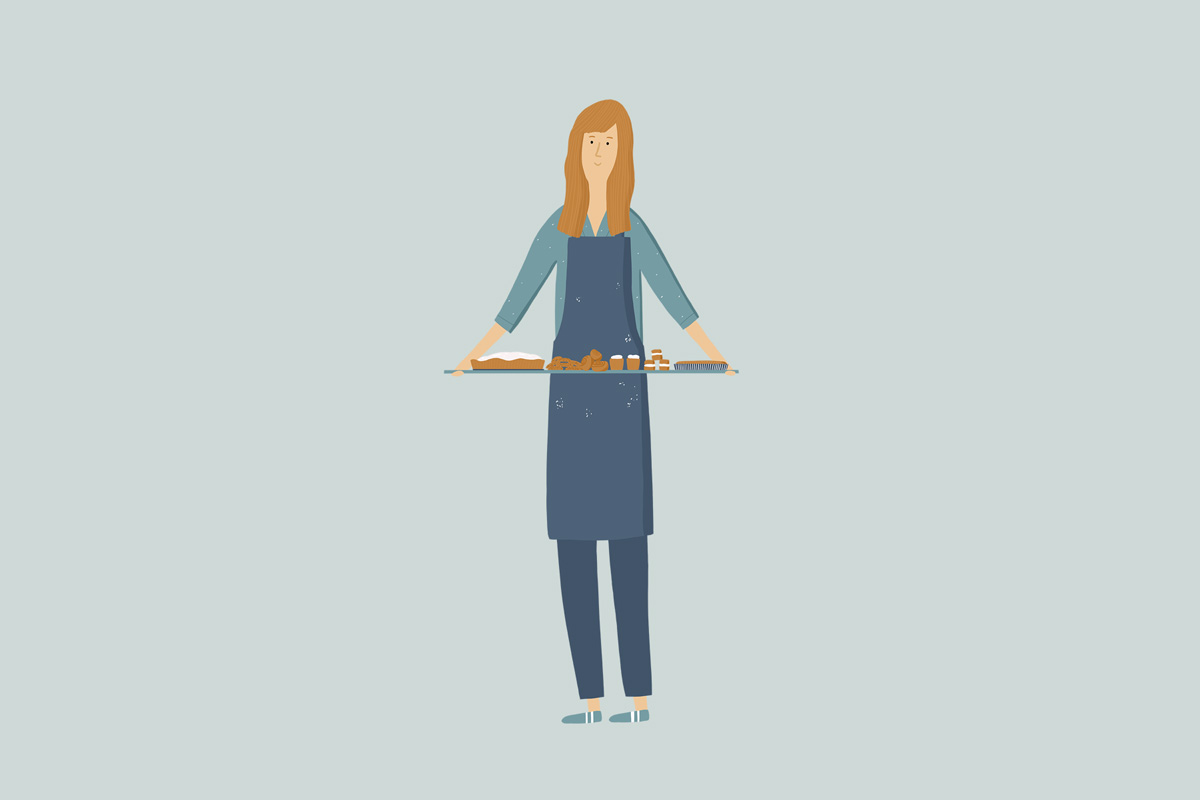 Author, food stylist, former pastry chef and founder of Hackney’s Violet Bakery, Claire Ptak, started baking in her mother’s Californian kitchen at the age of five. Now people queue up along Hackney’s Wilton Way for her whoopie pies, cupcakes and drizzle cakes, all made with organic and seasonal ingredients.

Describe your ideal day off in Hackney.
I would start at Violet with a flat white with oat milk and a spelt prune scone (the prunes are soaked in Earl Grey tea) shared with my 18-month-old daughter Frances. Then we might walk through London Fields, down Broadway Market past Columbia Road. I love Columbia Road. I have been going there for 12 years and it’s super quiet during the week. For lunch we would probably go to Rochelle Canteen. Then Luna and Curious, which sells children’s clothing, toys and all sorts of interesting things, many of which are made in the area. There are lots of amazing activities in the borough for children – singing, art classes, lots of lovely playgrounds – so the afternoon would probably consist of some sort of activity with Frances.

What is your favourite bar or restaurant?
P Franco is a wine bar on Lower Clapton Road in an old Chinese takeaway, which was opened by some friends. They do off-sales, but they also do food and you can have a glass of wine there. They import some of my favourite natural and low-intervention wines – organic, biodynamic. They have an amazingly diverse collection, lots of bottles that are super-hard to find. They do delicious charcuterie and they have guest chefs at weekends from time to time.

What is your favourite shop?
There is a shop called Momosan on the same street as Violet, at the opposite end of Wilton Way. A Japanese woman called Momo runs it and she just has wonderful things that she collects when she goes home to Japan, or from New York and Los Angeles. She also works with ceramic artists in the UK who make things for her. You can see things in there that cost £5 and things that cost £500, which is really cool. I went in there one day and they had this beautiful display of cacti, which were gone a few weeks later – she treats the space rather like a gallery.

What was your most memorable night out in Hackney?
I don’t go anymore, but 12 years ago I would always go to the Dolphin. There was a guy who did karaoke, and there were a couple of old crooners who were amazing – they would sing Frank Sinatra type stuff. I got drunk enough to put my name down, but this guy just kept singing and singing, and eventually after about five songs, I just got up there and sang Pat Benatar – it was horrific!

What is your favourite open space in Hackney?
It would have to be Hackney Marshes. I have a whippet called Shuggie Dog, named after Shuggie Otis. And he loves to run really, really fast, which is tricky in most parks because there are people and kids, so it is amazing to go out to the marshes because he can run free. I also forage for blackberries, sloes, and elderflower there. You feel so far away from the city.

Where would you take visitors to show them the best of Hackney?
I would take them all the way up to the top of the tower at St John’s Church in Hackney Central. It is so old and small right at the top, and has the most amazing view.